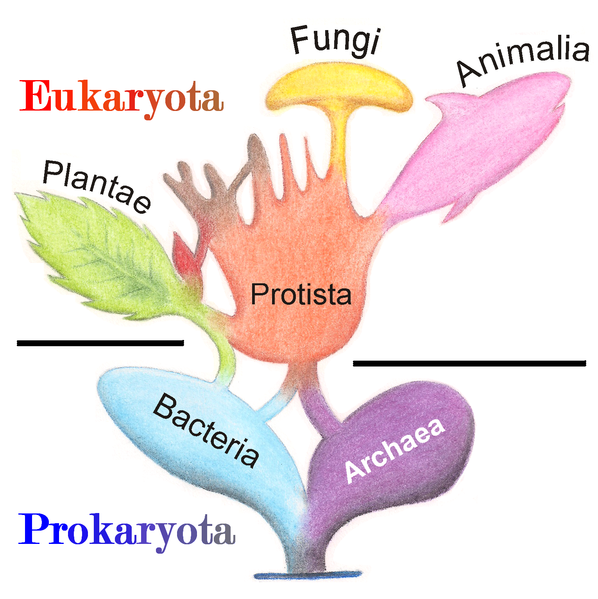 As of now we have classified  2,235,322 species on Earth. This includes all groups in the tree of life. But if you look closer, this tree is not very well balanced. First of all, eukaryotes represent 2,174,401 species – that’s 97.3% of all classified species! Even more surprising, animals represent about 64% of all species!  To contrast it, bacteria only account for 2.7% [1,2].

By now, you are aware that bacteria are found everywhere. They live in the most extreme environments like deserts or geothermal lakes as well as extremely cold places; they also live with us on our skin and in our gut, they help us make delicious food (such as bread, cheese or wine), and help plants and soil to be healthy.

Then why is their diversity so limited? Lian Chen and John Wiens tried to find answers [3]. They tested if multicellularity and sexual reproduction could explain these differences in the tree as well as diversification rates: the rate at which new species form in the 17 kingdom-level groups. They found that multicellularity explained about 50% of the variation among the different groups, while sexual reproduction accounted for 40%. If taken together, the explained variation went up to 57% as a combined effect of both traits. This means that these two parameters could explain a bit more than half the differences between the diversification in the groups. They then looked at the diversification rates which was also explaining some of this variation as previous studies have shown too.

These results are based on statistics only and therefore cannot prove causality. They mainly show an association between the traits and the fact that there are more species that have them. The authors also highlight that other traits that were not tested could also explain these differences in the number of species, as the tested parameters only explained about half of the variance. However, the authors were not sure which traits because these organisms are quite diverse and it is difficult to find similarities between them. Nevertheless, they highlight that specific traits per group could determine such a high diversity rate, and in that case, many variables could be involved in these mechanisms.

However, it does seem that being multicellular and having a sex life does help to diversify, although the authors do point out that both are strongly associated, and it seems that multicellularity explains more of the variation. Multicellular organisms contain more complex structures like tissues and organs which may increase the diversity rate as a whole.

In addition, bacterial species are difficult to delineate [4] and they have found other ways to increase diversity by exchanging genetic material directly between individuals rather than just waiting for evolution to give them some advantage. So maybe species definition for microbes is not the same as animals? And maybe their diversity is at a different level, so maybe they don’t need a sex life to be diverse?