There is a reason our planet is called mother earth. Despite the vast swathe of oceans that envelope the majority of our planet, the soil drives major environmental processes in climate regulation and global nutrition. The major actor in this incredible system is the soil microbiome (1).

Much like a mudslide, getting a firm grasp on the soil microbiome is nearly impossible. Discount the drastic differences in environments or even the types of soil that exist within the same ecosystem. A seemingly homogenous soil ecosystem belies diversity that impacts communities that are one mm away from each other.  Stressors include distances of animal burrows, depth, salinity, plant species and root systems, soil aeration, acidity, moisture, minerals, and presence of microbial predators- an exhaustive list that can dramatically impact the composition and metabolic function of these microbiological communities (1).  As the majority of our foods come from “managed” ecosystems, soil scientists have noticed an unsettling trend. Our soil’s carbon levels are dropping (2).

Why is this concerning? According to the current literature, the soil microbiome primarily relies on “organic” carbon- decomposed roots and root products. The soil microbes and fauna further degrade this into a dark, carbon-rich, and stable humus. Not “hummus” the famous chickpea dish – it is pronounced “/(h)yooməs/.” But much like the dish, it is bulky, moisture retentive, and a delicious long-term source of nutrients.

The total amount of organic carbon, soil organic carbon, is a commonly used metric within the agriculture field because it plays such an important role in stabilizing the ecosystem. Broad-scale industrialization’s pesticides and excess nitrogen use, in addition to deforestation, disrupts the important carbon interchange. To make matters worse the decreased carbon fixation results increase atmospheric carbon dioxide (CO2), exacerbating the greenhouse gas effect that has been shown to be a direct contribution to global warming (2).

To better understand the soil microbiome’s role in the inorganic carbon cycle Bay’s team sequenced the metagenomes (entire gene make up) of soil samples from four distinct Australian ecosystems (4). Soil systems from the wetland, grassland, forest and dry land high quality assembled genomes provided insight on the functional potential of the soil microorganisms. These microorganisms belonged to 26 bacterial and 5 archaeal phyla within those four environments. Importantly, half of the detected bacteria are representative of global soil microbiomes. They found that on average, 72% of the bacterial genomes present encoded enzymes that could use inorganic carbon sources in metabolic respiration (Figure 2).

Figure 2. A figure of different bacteria phyla capable of fixing hydrogen gas, carbon monoxide, and other trace metals within soil content. Enzymes are depicted by the red shapes and each color corresponds with a phyla. This article was taken without any edits or the permission of the author (5).

Moreover, the bacteria capable of conducting anaerobic respiration were present in all four soil types. This was determined by taking soil samples from various depths from all four types, placing them within a sealable tube and exposing the soil microbiome only to the trace gases. Bay’s team measured the consumption of inorganic carbons within this closed system. They were able to detect significant oxidation of CO and H2 by forest, grassland, and wetland topsoil at rates up to five times greater than previously recorded. Moisture also seemed to play a role as wetter soil environments were significantly more efficient in utilizing inorganic carbons as an energy source than dry-land soils. It was consistent with metagenomic exploration that the majority of the bacteria have DNA for hydrogenase and CO dehydrogenase- important proteins involved in oxidation of hydrogen gas and carbon monoxide, respectively.

The researchers theorized that though these bacteria primarily rely on soil organic carbon to grow, their ability to sequester energy from inorganic carbon allows them to persist in an unpredictable ecosystem.  To determine the energy value of trace gases to the cell, Bay’s team used models to predict the energy a bacteria could produce from inorganic carbon.  The researchers predicted that the observed concentrations of inorganic carbon is just enough for the bacteria to survive in a static state, not growing or developing. Moreover this hibernating state  is only possible if conditions are somewhat favorable- like increased moisture. This experiment is summarized in Figure 3 below. 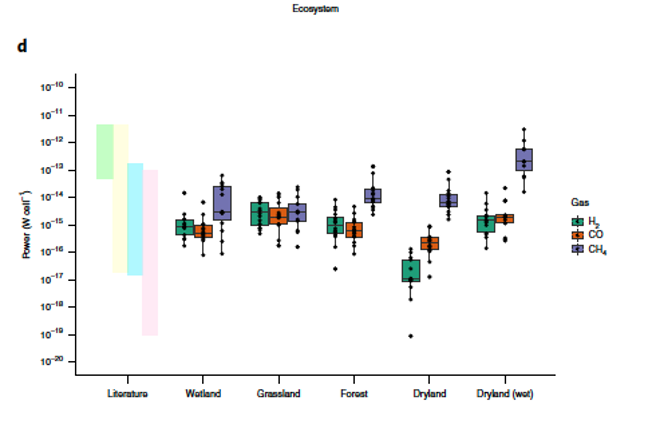 Figure 3. The y-axis demonstrates the energy gained  (Watts per cell)  when microbes from the four different soil environments (x-axis) are exposed to different inorganic carbon sources (different colored gases). The amount of energy needed to maintain the energy consumption rates of several pure cultures of bacteria found in soil microbiome (green, yellow, blue) and from deep floor sea vents (pink) are also demonstrated within the graph. These values are obtained from literature. This image is replicated directly from the original paper (4).

The researchers also noted that though cells could potentially utilize the inorganic carbon efficiently, not only to their own benefit, but to ours. In light of the troubling rise in atmospheric carbon dioxide and other greenhouse gases (like the inorganic carbons mentioned in this article), the need for carbon sinks or natural repositories has escalated.

The most famous carbon fixing chemical reaction is photosynthesis. The gist, as you may recall- is the  conversion of CO2 and water into a six-carbon sugar and oxygen by harnessing the power of the sun. As large scale deforestation of rainforests impact this important carbon sink it is a relief to discover certain soil bacteria also revealed genes capable of chemosynthesis. This pathway utilizes atmospheric inorganic that would otherwise fall under the general label of greenhouse gases redirect carbons into the soil.

Though these pathways are exciting- the reality is that trace gases are not available in a high enough quantity or be consistently available in increasing soil depths. Thus, the likelihood that bacteria could survive completely independently of soil organic carbon is quite low. Perhaps industrialists whose soils are poor in organic carbon could utilize high aeration techniques- which could increase the soil microbiome’s exposure to trace gases (4).

Figure 4. Image copied directly from this website without permission from the author.

The frontier of additional carbon sources within the soil microbiome is an exciting one. The resilience and persistence of these microbes make soil one of the most densely populated concentrations of bacteria (1) and rockstars in global nutritional processes.  But until we can utilize our newfound knowledge to address the low soil carbon problem, soil bacteria will have to dream of humus while picking at low concentrations of inorganic carbon to survive.