This story took place in the southeastern United States, but this could  happen in many other parts of the world. It is in this setting,  a mysterious disease was affecting birds of prey and waterbirds close to man-made bodies of water. Birds began to lose weight. They plummeted to the ground, crashing into objects as they lost the ability to coordinate their movements. This neurological disease that they contracted, vacuolar myelinopathy (VM), led to their death. The agent of this disease: the cyanobacterium Aetokthonos hydrillicola.

The question is: how could a cyanobacterium kill a raptor?

A bit of history

The epidemic began in the mid 90’s, by the discovery of a high  number of deaths among the bald eagles. But not only among raptors, waterbirds such as American coots, ring-necked ducks, mallards, and Canada geese were also affected. The underlying feature of this mass mortality is the proximity of a man-made waterbody (recreational lakes, hydropower reservoirs, farm ponds, and etc.). In all these water-bodies Susan B. Wilde [1] found the presence of an exotic aquatic plant, Hydrilla verticillata on this plant lurked a bacterium!

Figure 1. Cyanobacteria (in red) on a leaf of Hydrilla verticillata. Image copied directly without any modifications from Susan B. Wilde et al [2]. 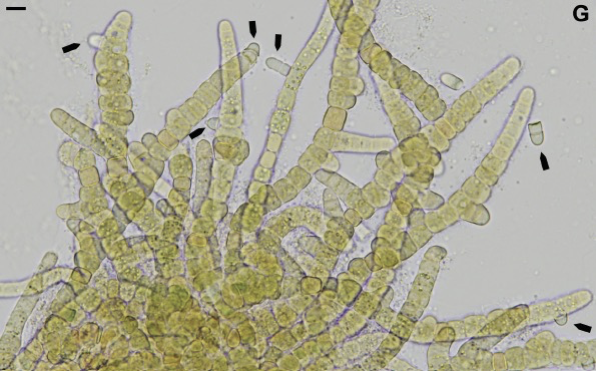 S. B. Wilde describes this epiphytic (organism that lived on the surface of a plant) bacterium as a new member of cyanobacteria and named it Aetokthonos hydrillicola (in Greek: “Eagle killer residing on Hydrilla”) (Figure 1 and 2) [2].

Figure 3. A. hydrillicola cultivated in laboratory cannot cause VM on chickens. Figure made on Biorender.

Cyanobacterium is a phylum of bacterium that can use the light as a unique source of energy, also known as photosynthesis. Unfortunately,  members of cyanobacteria are often able to synthesize in addition to energy a wide range of toxins. Breinlinger and colleagues [3] hypothesize that A. hydrillicola produces toxins only under specific conditions (Figure 4). To elucidate this hypothesis, researchers collected samples of H. verticillata with A. hydrillicola  in vacuolar myelinopathy (VM) confirmed sites. They performed an AP-MALDI-MSI experiment. This technique allows the detection of cyanobacteria specific compounds in situ (such as toxins, metabolites…)

Figure 4. Hypothesis: A. hydrillicola can produce its toxin only in environmental conditions. Figure made on Biorender

Interestingly, an unknown metabolite was found in environmental samples, but not in laboratory derived cultures (Figure 5).

Figure 5. The AETX structure with five bromine atoms (Br). Figure made on Chemwriter.

This novel natural compound appears to contain five bromine atoms. Notably, the culture medium in the lab did not contain any bromine. The authors hypothesized that the lack of bromine contributed to the laboratory version of A. hydrillicola’s inability to synthesize any toxins. To test this, they supplemented  the laboratory cultivation medium  with  potassium bromide. Excitement! The addition resulted in the biosynthesis of the toxin! (Figure 6)

However, at this stage a new question arises: where does this bromide come from in the environment? Breinlinger et al noticed that in the man-made water bodies, the aquatic plants H. verticillata contain higher levels of bromine than in both the sediment (20-fold) and water (500 to 1000-fold).  During the late fall, when H. verticillata senesce, leaves change its color and at the end, the fall and full degradation of leaves release bromine into the local environment, where it can be used by A. hydrillicola to synthesize its toxin.

Poison that does not only kill eagles

The authors named this toxin aetokthonotoxin (AETX) for “poison that kills the eagle” in Greek. They found a gene cluster in two distinct A. hydrillicola isolated from water-bodies. This cluster (aet A to F) is not present in other bacteria, it seems to be specific and most likely useful for synthesizing this toxin (Figure 7).

Figure 7. Gene cluster found in A. hydrillicola. Arrows represent genes. Gene cluster is a group of genes that encode proteins which work together to do the same function (such as synthesizing toxins).

The tryptophanase (AetE) could convert tryptophan (an amino acid) to indole, the two halogenases (AetA and F) could serve for bromination (introduction of bromine ion) of the toxin. To test this hypothesis, Breinlinger and colleagues mixed AetF with tryptophan. The result indeed demonstrates an addition of two bromines on tryptophan (Figure 8).

Figure 8. Steps of bromination of a tryptophan (left) by AetF. The protein adds a first bromine (mid) then a second bromine (right). Figure made on Chemwriter.

AetF works together with the other Aet proteins to make the AETX toxin.

The authors then isolated the toxin and tested it on animals to determine the lethal dose for 50% of the population (LC50). For Caenorhabditis elegans (worm) it’s 40 nM, for larval Danio rerio (zebra fish) it’s 275 nM. For example, a piece of sugar diluted in a glass of water has a concentration of 292 mM (292 000 000 nM). In sublethal concentrations, neurological behaviors such as loss of equilibrium were observed in zebra fish the same comportment as for birds of prey!

The last experiment of Breinlinger is the avian bioassay. Chickens were fed with a suspension of purified AETX (left on the figure 9) or with AETX (mid on the figure 9) containing H. verticillata- A. hydrillicola, or with solvent (right on the figure 9). No clinical signs were found in all chickens but there was an extensive apparition of vacuoles (compartments full of liquid) in the white matter of the brain in chickens which have eaten AETX, confirming AETX is the causative agent of VM.

The AETX synthesized by cyanobacteria present on the top of an exotic plant in man-made waterbody can be transmitted to every member of the food web, from herbivorous water birds to birds of prey. The AETX biosynthesizers need bioavailability of bromide which could come from geologic or anthropic origin such as herbicides used to kill, ironically, aquatic plants.

This demonstrates once again that all living organisms are connected to each other and with the environment and something that can touch one of them could touch all of them (Figure10).

Figure 10. The cyanobacterial toxin could affect all the living organisms in the food chain including humans. The plant (right) is H. verticillata, bacteria on the leaves are A. hydrillicola, the molecule is the toxin AETX.

One toxin to kill them all, and in the darkness bind them.
In the Land of Earth where the shadow lies.