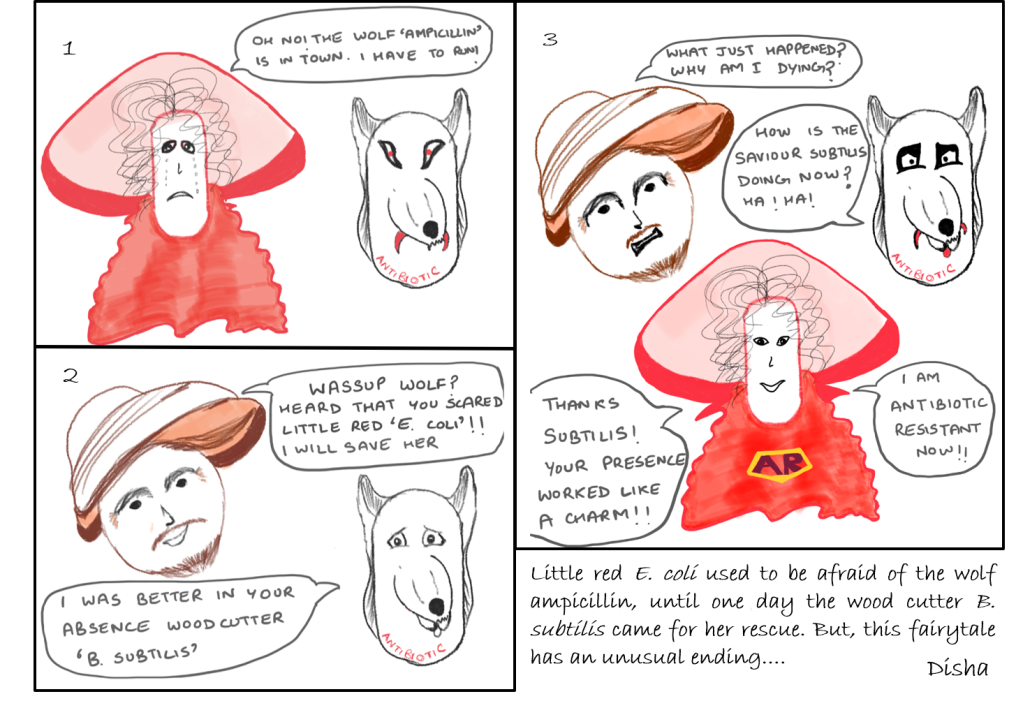 Once upon a time, bacteria used to be afraid of antibiotics. Not long thereafter, they armed themselves with mutations. Because of these mutations, some bacteria were able to overcome the antibiotics. Life was easy for bacteria! Until today…

Ampicillin is a broad-spectrum antibiotic, meaning that it is effective against a wide range of bacteria. Researchers chose two bacteria with different susceptibility to ampicillin: Bacillus subtilis (B. subtilis) and Escherichia coli (E. coli). When grown along with the broad-spectrum antibiotic ampicillin, B. subtilis is tolerant and grows albeit a bit slow, but E. coli is sensitive and does not show optimal growth. Researchers found that when the two bacteria are grown together, B. subtilis loses its tolerance towards ampicillin whereas E. coli becomes tolerant to ampicillin and survives. So the fate of the co-culture followed the last route amongst the four scenarios explained in the previous paragraph.

How would this new information impact medicine?

This dynamic interaction between microbes can be summarized as cooperator-cheater dynamics. The cooperator is B. subtilis because it neutralizes the antibiotic. The cheater is E. coli because it doesn’t contribute anything to inactivating the antibiotic and instead takes advantage of all the hard work done by B. subtilis. Laporta and Ojalvo mentioned in another interview that this information can be used to tweak antibiotic resistance of pathogenic bacteria, by providing probiotics containing non-pathogenic cheater bacteria. The presence of probiotic bacteria will make the pathogen sensitive to antibiotics, thus making it weak.

Does this mean that the physicians have to change the way they prescribe antibiotics? Tricky question! We may have to wait for a couple more years of research to find that out.