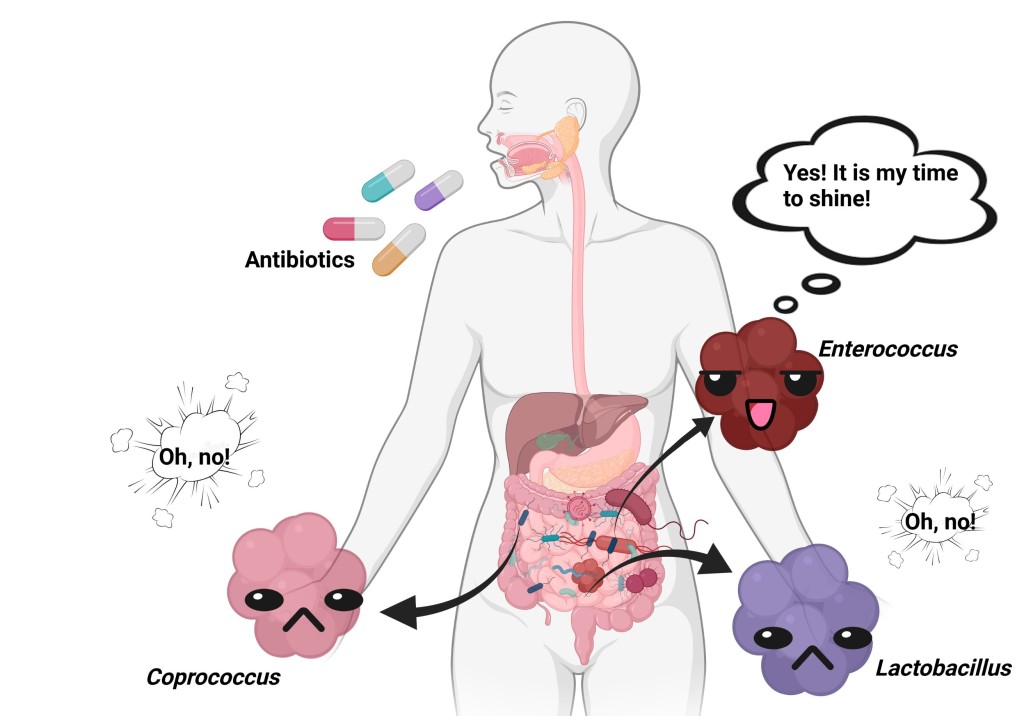 Intestinal microbiota, also commonly known as gut microbiota, constitutes the largest population of microorganisms residing in the intestine in the human body. The diverse microbes present in our gut influence our immune, metabolic and neurobehavioural traits.

Microbes present in the gut can be briefly grouped (three types) depending on their interaction with the host system as  symbionts/ mutualists, commensals and pathogens. In the first case, both mutualists and the host are very intimately associated and equally benefited. Commensals, for their part interact loosely with the host to obtain benefits like nutrition and protection, and in turn, generously provide the host with essential nutrients, contribute to intestinal architecture while also defend against colonization of opportunistic pathogens. Pathogens exploit the gut environment either through “evolved” strategies enabling their replication or by exploiting available nutrients and regulatory signals for their own selfish expansion and virulence.

Mutualists and commensals are the ones mostly stabilizing gut microbiomes, while also providing the host with beneficial enzymes and other supplementary molecules that the host gratefully uses but does not produce. Often, when present in small amounts in the gut, some microbes are very beneficial with abilities to even reduce intestinal inflammation (Parabacteroides, Faecalibacterium, Coprococcus, and Odoribacter ), but turn virulent at higher concentrations.

Though antibiotics are a breakthrough in mitigating bacterial infections, their excessive consumption has a negative impact on the gut microbiota: they invasively sweep away the inherent bacteria- often mostly the beneficial ones, which are then simultaneously replaced by the opportunistic pathogenic microbes present in the gut. Long-term use of antibiotics can also further lead to antibiotic resistance in gut bacteria besides inhibiting them, and may also trigger intestinal diseases.

Well so far, the impact of antibiotics in the gut microbiota is known by our understanding of bacterial families and/or specific pathogenic species present, but we have yet to truly explore the effect on antibiotics on bacteria- both beneficial and pathogenic, especially during gut microbiota dysbiosis. The implications of this condition is important to us as during dysbiosis, the reducing diversity in microbiota can increase the chances of inflammation, enhancing susceptibility to pathogens and producing genotoxins as well as carcinogenic metabolites.

In a study conducted by Ce Huang et al (2022), 16S rRNA gene sequencing technology was employed to analyze the short and long-term effects of four antibiotics: ampicillin, vancomycin, metronidazole, and neomycin on the intestinal microbiota of rodents. They wanted to investigate the impact of the current methods of removing intestinal microbes while simultaneously providing clinically relevant information on antibiotics to treat bacterial infections.

They found that antibiotics ampicillin, vancomycin and metronidazole reduced the abundance of Coprococcus and Lactobacillus, two prominent Gram positive bacteria with  probiotic strains. They also found that ampicillin and vancomycin, which should have theoretically killed Enterococcus– a Gram-positive facultative anaerobe with multiple pathogenic strains, instead increased its abundance, while metronidazole did not influence it at all. They deduced that these observations related to the influence of antibiotic mechanism and subsequent competition among various bacterial communities induced by dysbiosis.

One of the observations was the changes in the structure of the microbiota from pre- and post- antibiotic treatment, which were in some cases- permanent. This showcased that exposure to antibiotics could indeed not only display short term effects, but also have prolonged lasting effects.

Their team claims that upon exposure to an antibiotic, bacteria tend to become resistant more frequently, which can be seen even in the gut microbiome. They further state that various microorganisms vary in susceptibility to different antibiotics, and as such the community (for example, the gut microbiome) stabilizes to a new state once the susceptible species drastically  decline, or are annihilated.

Hence, the resulting emergence of pathogenic bacterial abundance in the gut due to declining probiotics species followed by their possible antibiotic resistance is truly a concern, and a recipe for diseases and host infections. The team deduced that Bacteroides (potential next-generation probiotic) and Escherichia, inherent in the gut, are two candidates mostly likely to develop antibiotic resistant strains.

Their findings concluded that the four antibiotics- individually or in various combinations, lowered the microbial diversity. They agree that their results (at genus level) concur with previous studies that post- antibiotics decrease potentially beneficial bacteria due to overall decrease in diversity in the microbiota.

Their work, they also cautioned, had a major limitation: the 16S rRNA gene sequencing technology employed did not differentiate at species level “confidently” during taxonomic assignment of the different bacteria being observed. This is a drawback as generally, potential probiotics and pathobionts are usually species-dependent rather than genus- dependent.

Since the antibiotics were administered orally over a short time (2 weeks) with subsequent drastic observations, this work opens ways for further research. For example, various dosages of the antibiotics and routes of administering them could be further explored. The different mechanisms causing the observed changes in the microbiota could also be investigated.

Thus, these scientists strongly endorse considerate prescription of antibiotics in clinics. Two ways through which intestinal microbiota could be restored is fecal transplantation and probiotic administration, they commend.